Today I delivered the three kids’ sweaters to the library for their silent auction later this month. I am so happy to have found a deserving place for them.

Next up, I have set myself a goal to finish this WIP by the end of the year. Actually, my goal is to finish this other afghan by then as well. Both have been OTN since 2015. (Good grief!) Both are knit of double-stranded Berroco Vintage, so are soft and machine-washable.

The plaid one is about 3/4 done, so finishing it should take just a few weeks. It was originally intended for Elder Son, but in reality he runs warm enough never to need an afghan. So I shall give it to his girlfriend, who always needs an afghan, particularly when Elder Son is in charge of the thermostat.

Working on it during yesterday’s episode of Jeopardy. 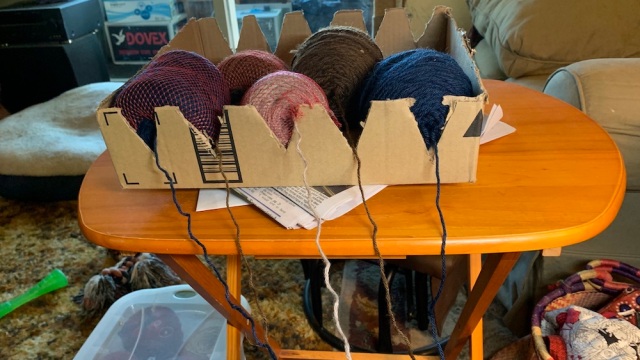 How I wrangle five balls of yarn for this intarsia plaid.

This is the second afghan, intended for Younger Son; pattern is based on Mason-Dixon’s Moderne Log Cabin blanket. I haven’t gotten it out from its Rubbermaid tote yet, but judging from this photo, it is a bit more than half done (yay!). So my goal to finish both by the end of the year is feasible. The question with this one is whether he will even want it. He too runs warm, so probably never needs an afghan, plus he has embraced minimalism so doesn’t want extra Stuff. When it is done I shall discuss it with him.

The success of this goal to finish both by midnight, December 31, depends on perseverance and tenacity and single-mindedness, not to mention a superhuman effort to avoid casting on anything else. Stay tuned… 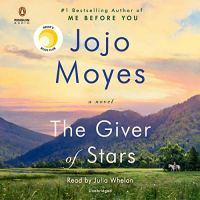 I finally finished listening to The Giver of Stars. I think I started it back in 1992. No, actually it was a couple months ago. I thoroughly enjoyed this story of a pack horse library in 1937 Appalachian Kentucky and the female characters that made it work. The ending was a bit saccharine — everyone pairing up to live happily ever after — but overall I recommend it. 3.5★

The Sweetness at the Bottom of the Pie by Alan Bradley.  Yes, it is a British murder mystery, generally some of my favorites, and yes, it won some awards, but frankly it was too cutesy, even for a cozy. It probably should have been in the Young Adult section of the library, given that the *detective* is an improbable 11-year-old girl. 2★

Chances Are… by Richard Russo. This one was for one of my book groups, but it didn’t come in time — s-l-o-w library deliveries these corona days. When it finally arrived I read it simply for myself. Russo is a delightful storyteller, with excellent characters and back stories. After just a few pages I felt like I .was being welcomed, hugged, and enveloped in a comfortable story. There is a mystery embedded in this one. I don’t think it improves the book, but I still recommend it. 4★

Unforgotten on Amazon Prime. A British police procedural about a cold case squad. Excellent acting, intriguing plots. Each season has six episodes that follow one investigation. Sadly, we finished season three, the last one filmed, this week. There is a season four in the works, but we shall have to wait for it.

This is just the latest British police drama we/I have watched. Happy Valley, River, Shetland, Luther (Idris Elba!), Broadchurch,  and Scott & Bailey were all excellent entertainment, and I particularly recommend the first and last one; they were both created by Sally Wainwright and have strong, fully formed female characters. Vera is probably somewhere in my near future.