Really, this is more of a data dump than blather.
Thoughts have been accumulating and need an outlet.

This pandemic has meant that a lot of us have become familiar with some medical terms we had perhaps never heard before.

And, of course, social distancing.

(You will have to listen to some ridiculous blather from rTrump first.
Do not be discouraged.)

This is tough truth. Dr Osterholm is well-known in Minnesota, where he was the state epidemiologist back in the day. We have a couple touches with him. Smokey had an epidemiology course from him back when Smoke was in public health grad school. He has remembered the doctor ever since because of what a great teacher he was. Smokey posted the video on his Facebook page; he discovered that several of his followers are also big fans of Dr Osterholm and have been since the 1990s.

Second, exactly a year ago the Big Read in the St Croix valley was Station Eleven, a book about the aftermath of a pandemic. My book group read it, and several of us went to hear Dr Osterholm speak at the Stillwater, MN, library. His big message, besides warning us that there will be a global pandemic, is that research is no good if it does not inform policy. We have seen that exact error, research being ignored when forming policy, in places like Georgia and the White House.

That Morning Joe segment was a sobering experience for me. If 60 – 70% of the population will have to get COVID-19 before we have herd immunity — and I am not doubting that — it means you and I have a greater than 50% chance to catch it. (Feel free to point out the fallacy in my logic. I am pretty sure it is faulty, but it gives me a quasi-valid reason to update my will and organize all the treasurer records for my entities so someone else can step into my shoes if/when it becomes necessary.)

Speaking of organizing my treasurer records, I need to show you my new setup. These were the unused file cabinets wasting away in an extra room. We moved them into my office. Then Smoke asked if I would like label holders on the front, which of course I did. He found these sturdy brass ones on eBay and even searched out brass single-slot wood screws to attach them. I am highly pleased with the new set up, especially the part where I can simply wheel my chair a few inches to the right to access all the new cabinets. The pile of “to be filed” stuff that still sits on top of the cabinets should never have to grow again. 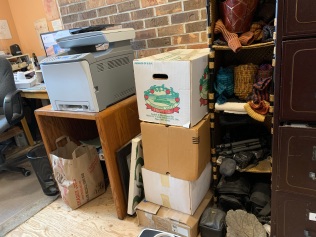 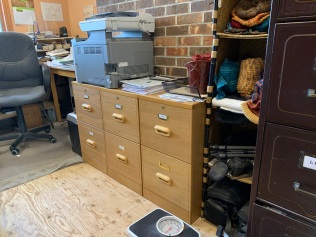 Left is before, right is today. What you cannot see is that a goodly portion of floor has opened up. The mess that is my desk still has a ways to go, as does the rest of the office. Baby steps.

Unfortunately, my printer caught the virus whilst being moved and jostled. I have tried everything I can think of short of magical incantations to get it up and communicating with my computer again. When I need to print something I have to email it to myself, go into my email on Smokey’s computer, and print it on his printer. Doable, but not desirable. One of these days I will have to remind Younger Son that I need his help to solve this problem. He can remote into my computer.

We chatted with Elder Son a couple nights ago. They have had only two patients from his hospital die, and their hospital has not been overwhelmed. There have been two outbreaks at his hospital, both in the dialysis unit, iirc. That unit is where their first case appeared; a woman on dialysis who, unbeknown to anyone, had the virus and coughed on everyone in the unit. He said it is hard to be mad at her because she has since been intubated in an Albuquerque hospital for a month. The other case was a dialysis nurse; she has been out for a month with the virus and subsequent recovery.

In comparison, the Navajo reservation, which is north and west of him and far larger, has been hit very hard. There was a segment about it on the PBS Newshour tonight, Friday.

ES’s job during this pandemic, besides treating patients, is to read the coronavirus journal articles and listen to the livestream put out by emergency room doctors on the East Coast; he summarizes the findings for the medical staff at his hospital. One of the many bits of knowledge he had gleaned was that chloroquine, that *miracle drug* touted by tRump, should not be routinely administered. He brought that knowledge to the medical staff and they acted, or rather, did not act on it. No chloroquine for Zuni patients. Other hospitals, like the three in Albuquerque and the three in Gallup, jumped on the chloroquine bandwagon. ES’s medical director had been taken aback when he initially talked to his counterparts at those other hospitals about the drug and found that they were using it, but subsequently he was able to feel vindicated when the NIH study at the VA seemed to show that COVID-19 patients were more likely to die if they were given chloroquine.

On the home front, we have been binge-watching Jack Ryan on Amazon Prime. The series is so well-done. It is like a big buck movie that lasts 12 hours, with engrossing plots and excellent acting. (Except for Season 2,  Episode 7: why is President Reyes keeping all those political prisoners alive out in the jungle? Does he think they will all have a change of heart so he can bring them back as sycophants? And why did he decide to have them killed? The logic escapes me.)

And speaking of John Krasinski, he started his own TV show on YouTube to share good news. Check it out.

Tonight’s dinner. The soup is from the cafe/coffee shop from whom I have been buying a gift card every week. This week I bought food instead — soup, chocolate chip cookies, salted caramels, and a quiche. The soup was delicious, as was the quiche last night. The bread was not a complete success, however. Two loaves ago I baked a whole wheat loaf. Taste was great, texture was way too dense. Next loaf was white bread; taste great, still a little too dense. I increased the water in this loaf; as you can see, it fell. Smokey found a website, BreadMachineDiva.com, with some recommendations to correct this in my next loaf. Onward!

I am especially enjoying watching Stephen Colbert’s nightly monolog from his home. It seems to be getting gradually looser as time goes on. He enjoys a cocktail, his wife wanders in, his dog gets treats, and he gets feedback from his son operating the camera. All of the late-night shows are getting more interesting guests like Bill Gates and Dr Fauci and fewer celebrities touting their latest book/movie/whatever.

“Messaging alone cannot solve the political challenge the pandemic presents for Trump…You can’t have Bill Barr redact the virus or call Ukraine to get dirt on Hunter Virus or get Mitch McConnell have 51 Republicans vote that there is no virus. You can’t even pay the virus $130,000 to stay quiet.”

Smokey sent me a link to this blog post by an ICU nurse in New Jersey.

Things I have learned during the stay-at-home time:

See? I told you this was a data dump. I hope I have not depressed you.
Just in case, here are my latest screenshots. 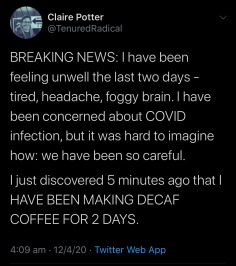 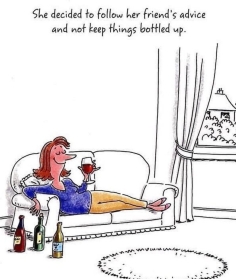 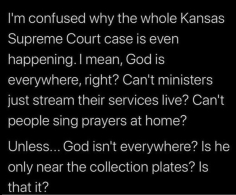 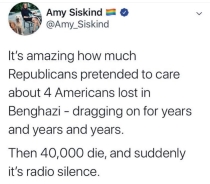 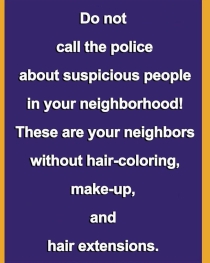 7 Responses to The blathering resumes.