Three (and lots more) on Thursday.

Skip ahead to 45:42 to hear Amnah Nawaz’s interview with our lieutenant governor.

“Grow up and do your damn job!”

Aside: Does anyone else turn their head sideways and try to read the titles on the books in the background of Every.Single.Video? Or maybe that’s just me…

From the chair of the state Democratic party:

Here’s what on my mind as I write this.

There’s a concept in psychology called “moral injury.” It refers to the profound mental anguish of witnessing (or perpetrating, or failing to prevent) an action that violates your deeply held moral beliefs and expectations. It’s the feeling of wanting to scream from deep within when you experience something that is fundamentally wrong.

That’s the feeling that many of us—and many watching around the country and the world—had over the last few days.

And then when we woke up yesterday and saw the videos on social media of lines, stretching far and yet farther still, of voters risking their lives to cast their ballots because, with righteous defiance, they refused to be suppressed.

Righteous but tragic. Because nobody should have to choose between risking their health and casting their vote.

Three sets of numbers will emerge from what just happened.

The first, between now and Monday, will be turnout: how many people voted in person, and how many absentee ballots arrived in the final day. People will try to game out projections for who won or lost. (Don’t put much stock in those.)

On Monday, we’ll get the second numbers: results. We’ll find out who won the Supreme Court race—and the 3830 other downballot races, the referenda, and the presidential primary.

The third set of numbers will take longer to unfold, and may never be quantified. That’s the number of people who get infected because they were exposed while trying to vote today, or because the personal protective equipment that would have saved them during a hospital shift was diverted to a polling place, or because their loved one voted and brought the virus back home. The downstream infections spread by those who caught COVID19 at the polls. Or the number of deaths that result from all those infections.

We might see coronavirus numbers rise in 2-4 weeks. Or maybe they’ll be lost in the general rising tide. But just because we might not be able to measure them won’t make the numbers any less real.

That third set of numbers—that set of human tragedies—should not exist. It did not have to exist. It was foreseeable, and foreseen, and a group of people in power decided that it was worthwhile to cause it to happen. We will not forget.

We will, however, thank those who have worked so hard—who made phone calls, sent texts, disinfected polling places, did all of the work in front of and behind the scenes to make democracy function and to make it as safe as possible. To those who put their names on the line and ran for office. To everyone involved in an unprecedented virtual organizing drive over the last several weeks, who adapted to the surreal reality we’re living in and rose to the moment.

From a regional newsletter:

And outside of Wisconsin, 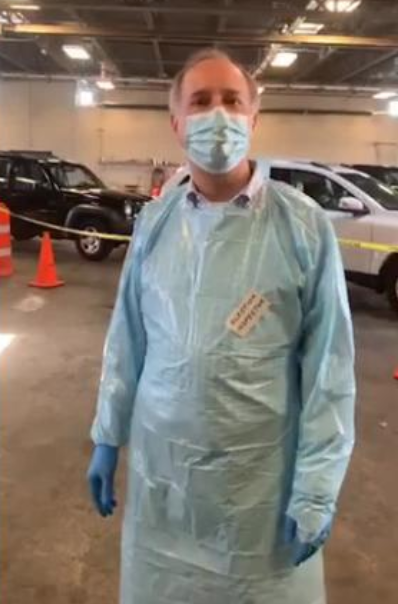 the condemnation was wide and deep for those who insisted on forcing many of you to choose between your vote and your continued good health.

The legacy of Assembly Speaker Robin Vos will include a photo of him in PPE at a polling station trying to sound safe and confident. It was said on one national broadcast that Kevin Bacon’s character in Animal House yelling “All is well” was more convincing.

The message “remember who did this” is already taking root beyond our borders.

Flowers all over Portland.

Give me your plants!

Scroll down to the video. It is a bit scary.

If someone could explain the bald guy joke to me I would appreciate it.

The story about the song.

And finally, 13 minutes proven to reduce your stress by 65%:

9 Responses to Three (and lots more) on Thursday.