…and what is the proper thing to do after finishing one pair of socks?

Cast on another pair!

Both pairs are double-thick — two strands of sock yarn, foot knit on US #2-1/2 and ankle on US #4 — so should keep her tootsies nicely warm. Both pairs will hit the mailbox as soon as I finish the second pair, which should happen sometime this week. Double-stranded socks go fast!

Actually, in between the two pairs of socks I knit a couple hats. 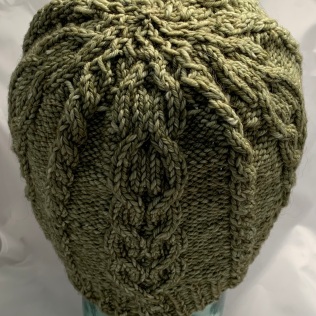 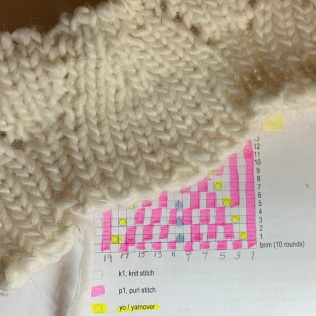 The first one is the Mountain Trail hat, knit from Malabrigo Rios ‘Yerba‘. That yarn is just scrumptious to knit. All those cables went well; almost no unraveling needed. Rios is great for cables and textures. Its plump strands make them stand out beautifully. (Oops, I just saw that I blogged about that hat already. Oh, well, this photo shows the three-dimensionality of the cables better.)

The second one is Chunky Walnut (unblocked; the wonky stitches will even out (I hope)), knit in Valley Yarns Berkshire, aran weight from deep stash, and was more of a challenge. This yarn was also scrumptious, but the pattern chart left rather a lot to be desired. I marked up the chart to make it easier to follow (my printer made it too faint for quick reading) — yellow for yarnovers, pink for purls, white for knits, and blue for centered double decrease. If you look at the chart it looks like the columns of stitches alternate between two knits and two purls, but the photo of the hat in the pattern shows consistent columns of knits and purls. It took a couple tries before I figured that one out. No one else who had knit it mentioned having trouble with the chart; I guess it was just me. Then user error led to more knitting and frogging and more knitting and frogging, rinse and repeat. I could have knit three hats in the time it took me to do this one. But I persevered because I really liked the look of the hat in the pattern photo. Now it is done, and I am content.

Both of these are intended for a silent auction or a giveaway. Or something.

When I was halfway through the first sock of the second pair at top, my hands yearned for bigger yarn on bigger needles. So I cast on for another hat, this one for myself.

That is going to be a Gathering hat, knit from some Lion Brand Jiffy (acrylic!) that I inherited from a friend who died a few years back. I was browsing the stash for some yarn to make a hat and noticed the Jiffy in my non-wool bin. When I searched Ravelry for some hats of bulky yarn, just to find out roughly how many stitches to cast on, I came upon this free pattern. Score! I have been wishing for a red hat — score x2! 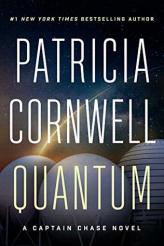 Quantum by Patricia Cornwell. I was hoping Cornwell had gotten over having such tortured protagonists. Nope, no such luck. I kept going and finished the book, but it was a bit of a slog. Particularly early in the book, a glance at any given page shows the reader prose with a generous scattering of acronyms and code numbers — not given to smooth reading, imho. I doubt I will read any more of Cornwell’s books. I leave them to others. 2-1/2★. 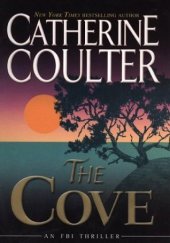 The Cove by Catherine Coulter. This is the first in a series about an FBI agent. I was hoping to find a juicy crime-fighter series, but I was disappointed. The obligatory romance turned me off. Give me crime, detection, thrills! I do not read for romance. 2-1/2★.

On Fire: The (Burning) Case for a Green New Deal by Naomi Klein. Elder Son reads pretty much everything this author writes; I think he may have recommended this one. My problem is that I have trouble reading non-fiction unless it is really, really readable, i.e., writing in a fictional style. This one was about to go back to the library unread, but I might give it another shot.

The Late Bloomers’ Club by Louise Miller. This one was for the book club sponsored by the library and held at a bar on Main Street. I started it but after about five pages decided it was too insipid to waste my time on. Snobby’R’Me. 2★

Chasing the Scream: The First and Last Days of the War on Drugs by Johann Hari. The one was a Christmas gift from Elder Son. He tends to over-estimate my capacity for intense non-fiction, having given me books like Thomas Pynchon’s Gravity’s Rainbow and David Foster Wallace’s Consider the Lobster and Other Essays in the past. This book, however, has kept me reading every night. I recommend this one! (No insipidity here!) 4★.

Fascism: A Warning by Madeleine Albright. I think it was Kat who recommended this book, and she was absolutely right. I am listening to it — it is read by the author, which gives it an extra ring of authenticity — and have driven the long way home just to listen to more. 5★.