Hatz! We have hatz!

I lost my momentum on my Fairfield sweater when the maths kept frustrating me, so I started a blue hat for the Hat Not Hate campaign sponsored by Lion Brand yarn. I think it is the one at lower left, above. 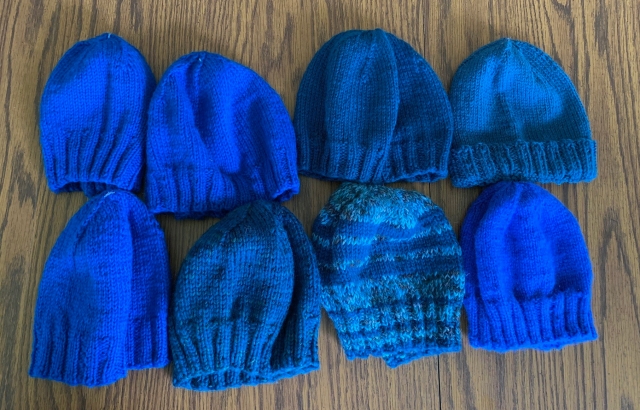 Hats are like potato chips — can’t knit just one. Pretty soon my goal became to knit up all my blue yarn, stash busting, yay!

But a more focused goal was to use up the eight shades of blue fingering/sportweight yarn that I acquired at a garage sale about twenty years ago. It was from an afghan kit and the afghan was unfinished. Even though the pattern was the crocheted ripple afghan, probably one of the simplest patterns on the planet, it defeated me, and the afghan remained unfinished. When I realized that I couldn’t complete the afghan I tried to unravel the existing afghan; no luck, the yarn — even though I am fairly sure it was acrylic — had merged into a solid fabric over the years. The eight hats pictured above, plus one or three in the photo about that, are all from that kit. There are 33g of yarn left, perhaps enough to make one more very small hat. Maybe I will make it, maybe not.

I decided to keep one hat for myself, the striped one in the second photo, above. It will replace the turquoise Sockhead hat that disappeared sometime in 2018. I don’t feel badly about it; I suspect most of the hats in the Hat Not Hate project will be worn by male heads, and that particular hat is decidedly less masculine than the rest. I used Teresa Gaffney’s Headford pattern from Drop Dead Easy Knits for all the hats, casting on either 72, 80, or 88 stitches for a range of sizes. I can now knit that pattern in my sleep.

Deadline for the hats is August first, so when I finished hat #26 last week I decided that was good enough. The hats were encased in zip-locs, packed into a box, and mailed out last Friday. Success!

Now, back to that sweater…

Let’s talk books; these are the ones I have read/listened to since I last posted in May.

The Tattooist of Auschwitz by Heather Morris. I listened to this. I found it hard to believe that such a person, so kind and generous and resourceful, could exist… and then I discovered that this was based on a true story. Inspiring. 4✭

An Unmarked Grave by Charles Todd. A World War 1 mystery. Readable, good female protagonist. This is the fourth book in a series; I should read the previous ones. 3✭

The Winter People by Jennifer McMahon. I read this for a newly formed book group. Readable, interesting, not great. 3✭

Neon Prey by John Sandford. The latest Lucas Davenport novel (#29!) from one of my favorite authors. It is rather amazing that Sandford can keep writing these and largely keep up their quality. This was neither the best nor the worst of the series. 3✭

Blindness by Jose Saramago. I tried to read this back in 2015 (yay for Goodreads that allows me to keep track of these things!) but couldn’t get into it. This time I listened to the audiobook. The book would be a very appropriate for a book group because it would make for really good discussion material.  3✭

Clock Dance by Anne Tyler. This one was for my book group. Okay, readable, not great. 3✭

The Alice Network by Kate Quinn. Another WWI novel, this one based on a real woman. Fascinating story, impressive characters. 4✭

My Sister, the Serial Killer by Oyinkan Braithwaite. Interesting, humorous, an ending I did not expect. 3✭

The Wife Between Us by Greer Hendricks. A semi-thriller that surprises the reader. I liked it. 3✭

One Step Too Far by Tina Seskis. The Goodreads reviews say it all. 2✭

Root Beer Lady: The Dorothy Molter Story by Bob Cary. 3✭ Nonfiction account of the woman who lived in the Boundary Waters Canoe Area Wilderness of far northern Minnesota for 60 years. There is certain genre of book that I will always love: books about people in the wilderness, whether living there, traveling through by dogsled, studying the wildlife, or trying to escape.

The Indifferent Stars Above: The Harrowing Saga of a Donner Party Bride by Daniel James Brown. I realize now that this book falls into the genre I mentioned above. It was interesting but somewhat more detailed than necessary — I couldn’t keep track of every single character because there were too many. 3✭

The Gentle Art of Swedish Death Cleaning: How to Free Yourself and your Family from a Lifetime of Clutter by Margareta Magnusson. I finally read this book that was all over the interwebs a year or two ago. Given that Smokey and I have been forced to free ourselves of a lot of stuff over the past six months since the Minneapolis house froze out, I am ready to read (nearly) anything that talks about decluttering. (“nearly” = I refuse to follow Marie Kondo’s method) 3✭

A Gate at the Stairs by Lorrie Moore. It seems like this was another of those novels that everyone was reading a year or two ago. It was okay, not great. 3✭

The Language of Flowers by Vanessa Diffenbaugh. I enjoyed this book which was for my book group that met last week. It sparked a long, long conversation among the five of us about our families. Any book that does that is worth reading. 3✭

The Lions of Lucerne by Brad Thor. Painfully bad thriller writing — overly complicated and improbable plot, impossible coincidences, unlikely escapes, one-dimensional characters, the obligatory love interest. I knew it was going to be bad when the author started name-dropping prestigious brand names. I like thrillers and mysteries, but I require better writing than this. 1✭

Holy Cow by David Duchovny. I picked this one up from a display at the library honoring June, dairy month. Didn’t finish it, too many other better books to read.

Joining Kat and friends — head on over to see what others are doing.