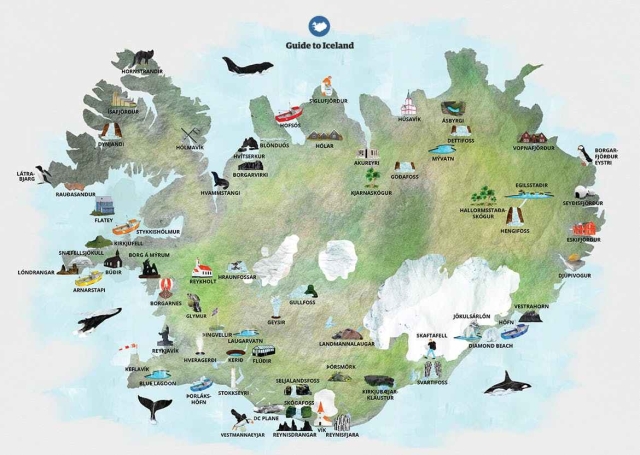 Elder Son and GF are going to Iceland for a two-week vacation. He has kept us in the loop as he made the arrangements over the past few months.

“We ended up getting a 4-wheel drive, automatic transmission, compact SUV.  And after reading some recommendations and horror stories online, I decided to spend $350 to max out the insurance (including sand and ash insurance), because various things I read made that sound like a good idea in Iceland, because of rough rural roads, gravel damage, sheep, high winds that can damage cars with volcanic ash, and also the winds that can tear the door off your car if you open it incautiously.  All the stuff that convinces credit card companies that give their customers complimentary rental car insurance in foreign countries to include an asterisk that says:

*except Iceland.
“Also the insurance does not cover damages sustained through negligence, DWI, getting your car door torn off by the wind (because you should park into the wind if possible and stick your fingers out the window to test the wind strength), or driving through rivers on the F roads with unbridged rivers.”
from https://www.bluecarrental.is/useful-information/terms/terms-and-conditions/ (emphasis added by The Kat™):

The following damages are however always on the renter’s responsibility and are not covered by the CDW or the SCDW;

SAND AND ASH PROTECTION (SAAP)
For our customers protection we have decided to offer an insurance which covers our customers against damage due to sand and ash storm which damages the paint of the car, windows, lights and plastic. These damages can cost between 500.000 to 1.500.000 ISK to fix.

By purchasing SAAP the self-risk in case of damage from sand and ash is lowered to 90.000 ISK. We offer the SAAP for only 1.650 ISK per day.

Volcano eruptions in the past years have increased the risk of damage to the paint and windows of all cars and no insurance company will cover these damages. In high winds and dry weather, the ash from the volcanos and sand in the south coast can cause huge damage to the cars and all the cost has fallen on the renter, until now. (NOT included)

“I learned that today is the first day of nautical twilight in Reykjavik, which I think means that it’s the first night when there’s a brief period of gray half-light separating the colorful sunset and sunrise.”

Let me write to you of Iceland and its place in the fiber world.
I, too, would like to visit Iceland. (Also Tahiti, but that is a different story.)
In Iceland they sell yarn in the grocery stores. They may sell it in pharmacies and car repair shops, too, for all I know. (I have enough yarn, just in case you were wondering.)
The yoked sweaters you will see are called lopapeysa and are popular with knitters in all chill climates. The cedar chest in Minneapolis holds yarn that I bought 40+ years ago to make such a sweater for myself, but it never happened. The authentic lopapeysa is knit from Icelandic wool, which comes, appropriately, from Icelandic sheep. Those sheep are an ancient and unique breed that you can read about here:
Icelandic sheep. More about Icelandic sheep.

Lopapeysa sweaters and Lopapeysas on Ravelry.
I have knit two sweaters of Icelandic wool (neither of them lopapeysas), one for my old boyfriend Terry and one for myself. I fear that such a sweater would be too warm for me now.
All knitters want to go to Iceland. Just so you know.

Most recently I sent him this link:

Postcards from Iceland, a letter from Ann Shayne on the masondixonknitting.com website.