This is kinda how our newest kitty, Jonesy, looked sometime after midnight last Friday. She made the mistake of walking on the big lump under the bedclothes… which happened to be Percy the pit bull. We know he doesn’t like to be walked on when he is under the covers, but in the past he has just growled. This time he skipped the growl, whipped his head around, and chomped on Jonesy’s snout hard enough to pop one eyeball out of its socket. One of his canines punctured the roof of her mouth, and the other eye was traumatised, too, but to a lesser extent.

One of our cats had an eye pop out of the socket last week after a run-in with my son’s pit bull at 1:00 AM. The unusually gentle pit bull was under the covers and the cat walked on him. Startled, he nipped her with his powerful jaws popping one eye out of the socket, causing the other eye to bleed and swell, and his large canine tooth punctured the roof of her mouth causing significant blood loss. She came home today after a week at the vet and will have one eye sewn shut for awhile. We are $500* poorer, but she is doing well and we think she has at least some vision. Right now Jonesy is curled up about a foot from the pit bull and is purring loudly. All’s forgiven, I guess. Many thanks to Dr. John Springer who got out of bed at 1:00 AM to treat her and as well as the staff at Interstate Vets who cared for her during her hospitalization!

… Update: Jonesy is on the mend. She is eating and is more alert and we  think she has at least some vision in the eye that is not sewn shut. However, the pupil doesn’t respond to light. It is always fully dilated and according to the vet the aqueous humor is blood tinged. He fears she may be blind in her other eye because the optic nerve was so badly stretched when the eye was forced out of the socket.

Even if Jonesy is visually impaired, she can still have a good life with us. We had a neighbor in Minneapolis with a blind cat; Pearl the cat had learned to navigate the house perfectly. Both Jonesy and Pearl are/were destined to be indoor cats. Happily, we had already decided on that restriction when we got Thelma and Louise in 2017 after Hannibal and En Esch mysteriously disappeared after 13 years of indoor and outdoor activities. 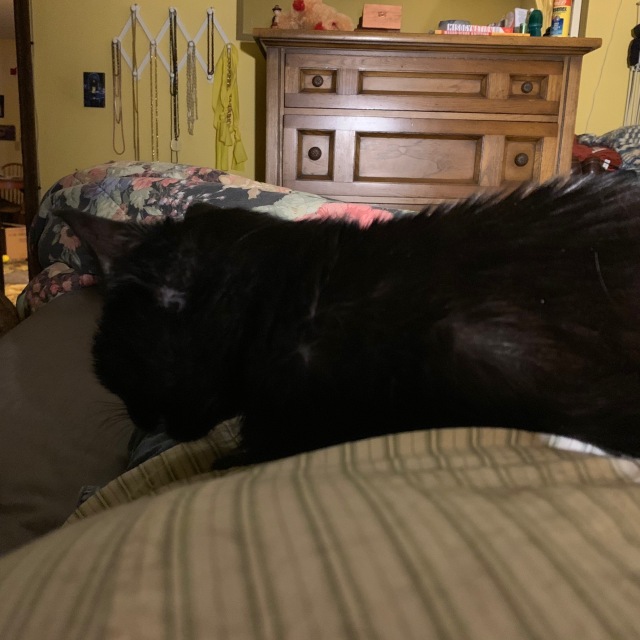 My view for six (6!) hours on Wednesday after she came home from the vet. She and I read two books, caught up on Instagram, played Spider on the iPad, and enjoyed the snuggling.

How Jonesy spent most of the Fourth, nestled into a bed I made for her on my desk.

She is on the slow mend, undoubtedly aided by lots of purring. Did you know that the frequency of the purring sound is in just the right frequency range to promote healing? Besides napping beside me in my office, she has slept with me all night, either on my chest or letting me hug her like a teddy bear. (I hate that. Ahem. Not.)

So now we are keeping Jonesy safe, feeding her canned cat food in deference to her sore mouth, and keeping a very close eye on Percy.

* $500 is way cheap for all the procedures, meds, and boarding Jonesy got from Interstate Vet Clinic. The bill would have probably been well north of $1,000 back in the Twin Cities.