Blog silence has reigned for…

Life got in the way. Nothing bad, no one has died, but I seem to have a plethora (one of my favorite words!) of URGENT! MUST DO NOW! OR SOONER! things on my to-do list. Blog posting has fallen by the wayside.

Speaking of to-do lists, I have employed a new technique I found on someone’s blog, sorry, don’t remember which one, and it seems to be working. It was invented by Dwight Eisenhower when he was president in the 1950s.

You can read about it here and watch a short video here.

I haven’t been using the matrix quite as described at those links. They talk about delegating, which is not really applicable to my personal to-do lists, and deleting, which I find to be silly. If I put it on the list, it is important to me at some level, so I am not going to delete it (yet). 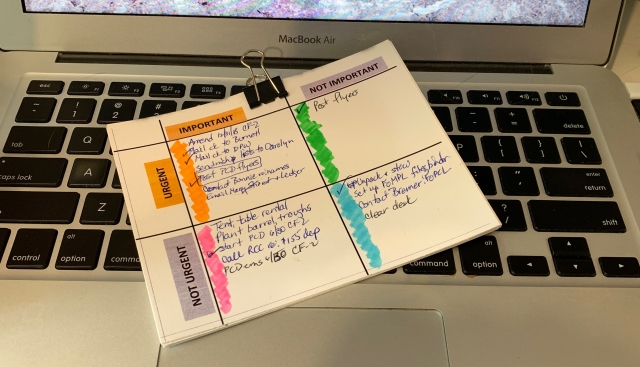 My to-do matrix for this week.

As you can see, I do not follow my own matrix exactly; for example, “Unpack and stow” in the lower right quadrant. Yesterday Smokey and I were going through our walk-in closet, which has always been used for extra pantry and other storage besides being where our clothes live. We got rid of a lot of stuff from there. Finally unpacking and putting away my duffle from the state Dems convention two-and-a-half weeks ago seemed to fit into that effort, especially since the newly cleared closet offered a nice storage place for the empty duffle.

Speaking of getting rid of stuff, we have exported from our house a crappetonne of stuff. After the freeze-out in the Minneapolis rental house in February, we had to clear out the basement so the workers could get in to start repairs. Over the years, departing renters have left a lot of stuff behind. That, and the subsequent “While we’re at it let’s go through our own stuff that is still there”, has meant that Smokey has spent one day nearly every weekend since February loading up his car in Minneapolis with help from Younger Son and bringing the stuff here. He carries the boxes in, I sit at the dining room table, and together we pass judgement. Everything goes into one of four piles: donate to Family Pathways, donate to the county Dems’ garage sale if we think the item could bring in more than $5, keep, and trash. The keep pile of boxes is the smallest of all four, yay!

He has become a bit obsessed with getting rid of stuff — he has always been a saver but has come to realize that all that stuff weighs him down mentally. Same for me, but he is the instigator of our going-through-stuff-and-sorting sessions. Way to go, Smokey!

One of the best things we try to keep in mind during those sessions is to go through things like our kids would, since whatever we don’t get rid of they will eventually have to deal with. My mom had a huge garage sale when she moved from their three-bedroom home to a one-bedroom apartment, thus saving me (only child) a lot of stress. The opposite was true of Smoke’s parents. We do not want to follow their example.

Is this Swedish death cleaning? No, simply because I have not read that book. But typing that sentence prompted me to request the book from the library.

Our sons will be proud of us 🙂

6 Responses to I’m baaack! Sort of…