Æbleskiver (Danish pronunciation: [ˈɛːbləˌsɡiːwɐ], [singular: æbleskive]) are Danish snacks that are spherical in shape. The name literally means apple slices in Danish, although apples are not usually an ingredient in present-day versions. Somewhat similar in texture to European pancakes crossed with a popover or Yorkshire pudding, æbleskiver are solid like a pancake but light and fluffy like a popover. Æbleskiver are cooked on the stove top by baking in a special pan with several hemispherical indentations. Pans are usually made of cast iron, allowing good heat retention. 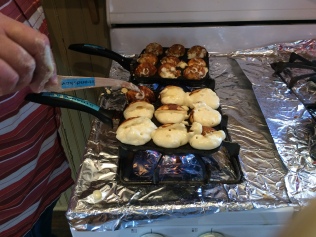 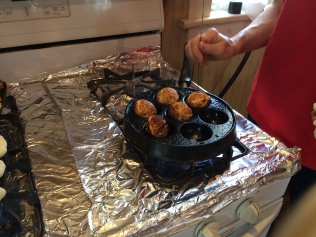 On Saturday evening we joined a friend to attend the annual æbelskiver dinner at West Denmark Lutheran Church*.

As is common in small towns, we ran into many, many people we knew (several of whom congratulated me on our recent takeover of the leadership of the 7th Congressional District Democratic Party) (and one who approached me to ask, “Are you who I think you are?”). There is nothing like small town friendliness.

One of æbelskiver cookers was a guy whom I used to prepare taxes with. The ticket taker and I used to sit next to each other when we were on the county board. One of the servers is the secretary of our local county party. And so on; you get the idea. 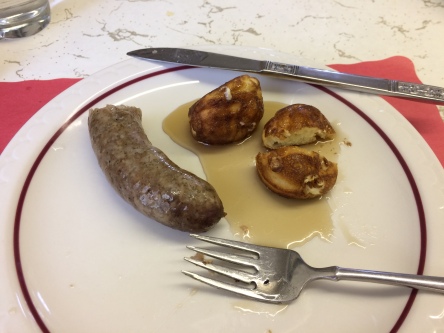 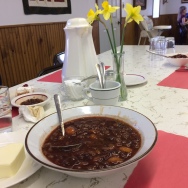 It was a light meal; really, more of a breakfast. Æbelskiver, always served three at a time, according to tradition; sausage; and fruit soup. Yes, that dish that looks like baked beans is actually fruit soup.

Plus strong coffee. No Scandinavian meal is complete without lots of coffee.

* It would not be a waste of your time to peruse the linked website for the church, and not only because it is probably the best non-profit website I have ever read. The events are interesting, and the pastor’s page is a delight.