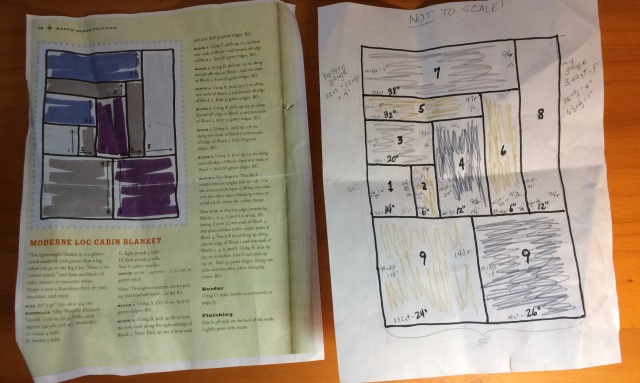 This is Mason-Dixon’s Modern Log Cabin blanket, modified. The pattern calls for DK yarn, but I wanted it to be 1, significantly larger, and B, not take centuries to knit. So I am making it with two strands of Berroco Vintage on US#10.5 needles. As you can see, I have made significant progress on the blanket. But on Sunday I ran out of the light gray yarn; apparently my calculations of how much I needed were off. Either that, or the other two skeins went to Florida for the winter. Not that I blame them. 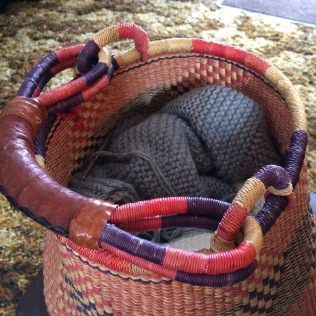 One of the cats had a UTI and insisted on peeing on anything soft. The vet gave her a shot of antibiotics which seems to have cleared it up, but I am protecting this afghan just in case. Making it uncomfortable for her to perch on the afghan seemed prudent.

My friend Nancy was wearing one like it on Friday night at the trivia contest where she was maintaining the scoreboard.  I scoured Ravelry later that night to try to find the pattern. Success! It is Chartreuse by Thea Colman.

My problem was that I still have at least two afghans — the one above and this one, for Elder Son — to finish before I have given myself permission to cast on anything new. I pondered and debated for two days, first being an adult and saying NO to the new sweater and then…

…perusing the pattern details on Rav more closely, I saw that it was knit on US#6 needles at a DK gauge. I happen to have a generous sweater’s quantity of Knit Picks City Tweed DK that I have long been visualizing in a cabled cardigan. I even swatched the yarn long ago and its gauge matches the pattern. Score! All this made it way too hard to resist The Sweater.

The end. Or rather, the beginning.

On the reading front, I read George Sanders’ Fox 8, which was short and good. Then I read The Good Mothers, which is about a female prosecutor and the Calabrian Mafia and how three mothers who were part of it broke its back. Excellent. Then I moved on to A Discovery of Witches by Deborah Harkness, which may be good but didn’t grab me, plus it was nearly 600 pages. I have a number of books on request from the library and expect them any time; I don’t have time to read a 600-page book that may not be worth it to me.

(Note: I am writing this during the commercials while binge-watching House. I think the star’s pathological sarcasm and nastiness is contagious.)

Right now I am reading When Breath Becomes Air by Paul Kalinithi. It is the memoir of a 36-year-old neurosurgeon diagnosed with terminal lung cancer. He is a wonderful writer; and I read every well-reviewed book about the medical profession in my effort to understand and empathize with Elder Son’s chosen field. The book is every bit as good as the reviews say. Recommended if you are into that sort of thing.