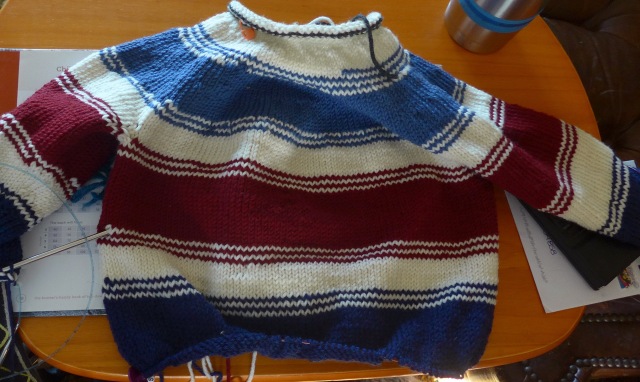 I showed you this sweater last week and said that it would be done by the time you read that post.

I played yarn chicken with that last blue stripe and won. Had only a couple yards left. Continued on with one last white stripe; got plenty of the white yarn, no problem. Switched to oxford gray for the last stripe and the final ribbing. Finished the sleeves that way and realized I didn’t necessarily have as much of the gray as I had thought.

Another game of yarn chicken ensued, but this time I lost. There was enough gray yarn for the gray section but not for the final ribbing. The yarn is from Smiley’s and is no longer available; I bought it years ago. A Google search and an eBay search for that yarn turned up nothing. However, the dark blue stripe in the sweater is Knit Pick Wool of the Andes superwash, and I decided that oxford gray WotA would work to finish the sweater. The final sleeve section and ribbing will be the original yarn, the final body section and ribbing another, oh, well. The additional skein has not arrived yet, in fact I haven’t received notice that it shipped.

I just clicked over to KP to see if it had been shipped… and discovered that the yarn was still in my cart. Apparently I had not submitted the order.

Well, it is submitted now — we shall see if it gets here in time. If not, the sweater will go into next year’s warm clothing drive.

While working on the sweater over the past couple weeks I pondered what to knit next. Several projects appealed — finish my Carbeth, cast on for that Noro Silk Garden sweater I bought the yarn for in 2010(!), maybe a red scarfy shawl with the Dream in Color Everlasting Sock or Dream in Color Smooshy with Cashmere or even the Sunshine Yarns Soft Sock.

However, in the end my grown-up self decreed that I would instead finish the UFOs cluttering my life. Carbeth needs some dedicated thinking about the fit from the armholes to the neck, so it will wait until I have the charity knitting out of the house. Even though the rest of the child’s sweater is relatively mindless, I didn’t feel up to dealing with the challenge of the Carbeth at the same time. Instead, I grabbed this sock that has been lying on my laundry/craft room table for a good long time. 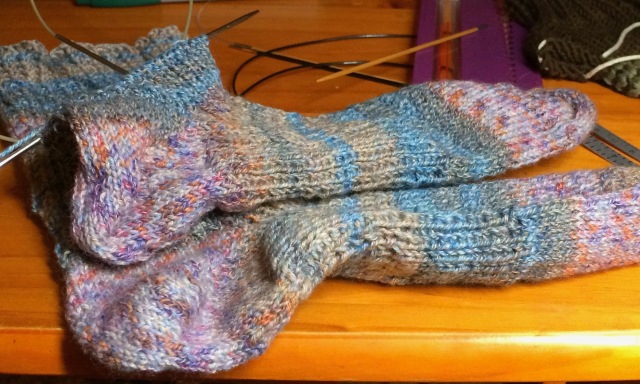 When I picked up this project, the first sock of the pair was done, and the second one was done nearly to the heel. The yarn is a wool/cotton/nylon blend, and I am quite enjoying the color(s). The sticking point is that I got way too clever with the ribbing. The instep and leg are broken ribbing, and I ribbed the arch, too, in an effort to get a more perfect fit. Not that the dozens of socks I have already knit for myself don’t fit, but I had seen this arch ribbing on some store-bought socks and thought I should try it.

The Great British Baking Show is giving me lots of knitting time and keeping me from hating the effort required by the ribbing. Now I am on the leg — just one kind of ribbing, thus less brain effort. The sock should be finished in a day or two. 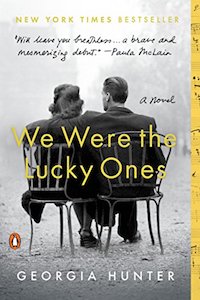 After all those disappointing books I talked about last week, I finally came upon one that is really good: We Were the Lucky Ones by Georgia Hunter. Based on a true story, it tells of an extended Jewish family in WWII Poland trying to survive the Germans and the Soviets. The writing is so good that it gripped me right from the start. It makes me feel the characters’ desperation and determination, sadness and love. Amazingly, even though there are multiple story lines that follow each of the many characters, I am having no trouble keeping them more or less straight. The narrative is based on the author’s forebears’ experiences during the war. Highly recommend, although based on others’s reviews at Goodreads, ymmv.