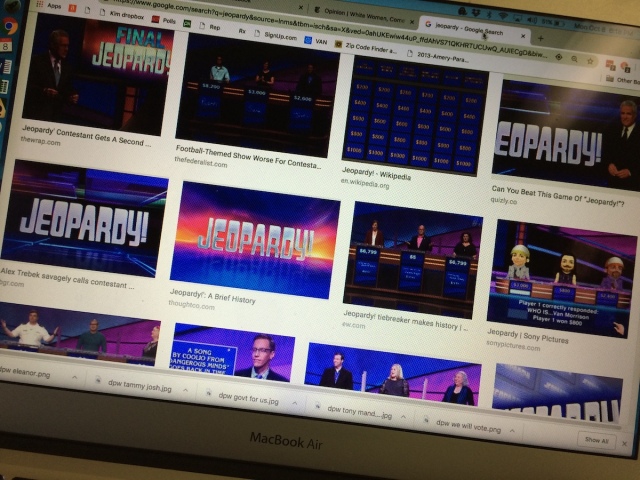 When will my Jeopardy! episode air?
I don’t know. It will depend on how many games the winner(s) before me win(s); that will determine how many contestants are needed and when. The Jeopardy Teen Tournament will be running the week I tape plus the following week, so my episode cannot air before Monday, November 19.

How do you study for this?
The woman from Jeopardy! told me to get some books about appearing on the show. I have requested all that are available in my library system and still need to check Amazon for others.  I remember that back in 1999 the first time I qualified to be in the contestant pool I read several books on the subject. What I remember most from those is that more than one contestant — and even champion — tried out multiple times, even as many as five like me. As I said back in August when I auditioned, Fifth time’s the charm!

She also told me to watch the show every day between now and the taping. Well, that probably ain’t gonna happen. We are at the very edge of being able to get reception from the NBC affiliate in the Twin Cities, and we cannot get their shows at all until the leaves fall off the trees. Yes, city dwellers, we out here in The Sticks have obstacles you never dreamed of.

Also, there are certain categories that often come up and which lend themselves to pre-game study: state and world capitals; US presidents, vice-presidents, and cabinet members; world leaders; and Shakespeare’s plays. I am in the midst of making flashcards for those categories — state and world capitals are done and I am halfway through Shakespeare. Smokey will drill me on them. I never studied Shakespeare in college, so that is a category I really need to brush up on. Those flashcards will have the name of the play on one side and major characters, location, and a one-line plot summary will be on the other.

Another aspect of preparation is that I have an eye appointment on Monday. The question board is about 30 feet away, and I have been saying for a couple months that I need new glasses. I was going to take care of that after the election when I will have the time to drive to the Twin Cities, but I am doing it now. Having 20-20 distance vision is essential to reading the question quickly and being confident enough to ring in.

Will you wear something hand-knit?
Well, duh. Southern California is not necessarily conducive to wooly wonders, but at a minimum there will be hand-knit socks. And, like all dedicated knitters, I am already planning my take-along project — something portable and mindless, probably a shawlette/scarf.

A friend posted this on my timeline today: 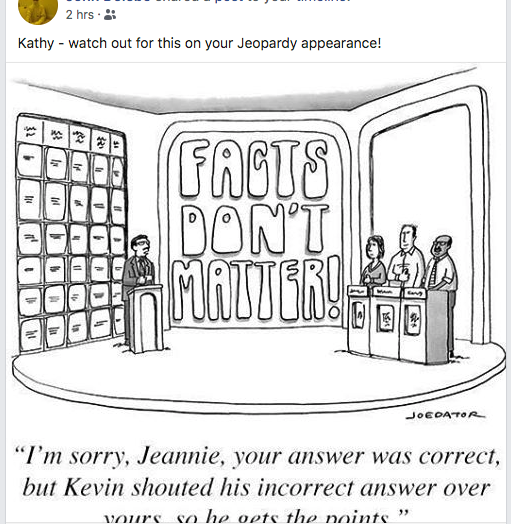