Lots of catching up to do here. Last Wednesday was the day after I worked a 14-hour shift at my polling place — primary election leading to the special election in January for our state Senate seat (guv appointed our senator to be commissioner of agriculture, trade, and consumer protection*.) I was way too tired to put together a post, and I had been canvassing and phone banking in the last few days leading up to the primary.

I finished another hat for the warm clothing drive. You cannot see it, but the last inch of the top is solid navy blue…

…because I played yarn chicken and lost. But the navy yarn — some Brunswick Pomfret Sport that I had used to knit Smokey a cabled vest back in 1975 — was the exact same weight as and an exact color match with the yarn in the hat, What are the chances?

After devoting so much of my knitting time over the past few months to knitting for others — afghan for Smokey; fingerless mitts and a hat for QGD#2 and #3, respectively; hats and mittens for the clothing drive — I cast on for something for myself.

Can you see the yarn’s gentle halo?

That is the beginning of a pair of fingerless gloves to wear when I read in bed. My hands and wrists and forearms often get cold. 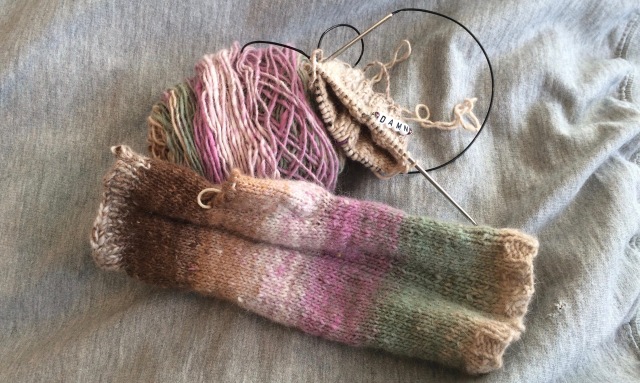 One done except for the thumb and #2 OTN.

These will feel like wrapping my hands in kitten fur because the yarn, Noro Shiraito,  is 45/45/10 cashmere/angora/wool(!) The yarn is single-ply and very, very, very soft and thus not suitable for anything that gets even medium wear. I am hoping that holding a book or iPad counts as extremely gentle wear.

I dumped Justin Cronin’s The Passage; too long, not worth the effort. Since that decision was made two weeks ago I don’t remember specifically what made me decide to drop it, just that I did. I think the writing was good enough but the plot didn’t grab me enough to read 766 pages. After that one I started Michael Perry’s Montaigne in Barn Boots: An Amateur Ambles Through Philosophy, but although it was highly rated in Goodreads it didn’t grab me either.

I would recommend The Dark Net by Benjamin Percy, the next book I finished, to anyone who likes sci-fi/dystopian fiction. My  appetite for those is limited, but I did finish this on. Have to admit, though, that by the end I was skimming whole pages. Two stars, but that is just me.

A book I did enjoy all the way through was Delicious!, a first novel by food writer Ruth Reichl. It is not great literature, but her writing about food is so on point that it made me hungry repeatedly. She is clearly a supertaster, clearly an advantage for foodie.

In a departure from my usual paper-based reading style, I bought several Kindle books, prompted by Bookperk. I don’t remember signing up for their daily emails, but they started coming about a week ago and snared me. Claude’s Christmas Adventure turned out to be a romance, but it was cute and Christmassy and had a dog protagonist and I didn’t hate it. The Ex by Alastair Burke was a decent mystery that kept me guessing until the end, although I had spotted most of the clues. Three stars. Last night I started Orphan Number Eight by Kim von Alkemade; pretty sure I will finish it because the plot and writing are good. Probably three stars. The books in the Bookperk emails seem to run to pure escapism but they cover most genres, and since the total cost for the five that I bought was under ten dollars I am satisfied.

In my ears: I finished Neil Gaiman’s Norse Mythology; I could listen to him read the phone book and be happy. Now I about a third of the way through Before We Were Yours by Lisa Wingate. It has a 4.4 rating on Goodreads, and I do not disagree.