It was a very good week for reading (in spite of me being miserable with this cold).

First up was Pothole Confidential: My Life as Mayor of Minneapolis by R.T. Rybek. I remember R.T. from his years as a reporter for the Minneapolis Star Tribune, but he did a number of other things after that before he was elected mayor in 2001. This book probably won’t appeal to anyone who hasn’t lived in Mpls, but as a former resident I found it fascinating. Rybek’s accomplishment that is most important to our family was how he promoted the bicycle infrastructure of the city, leading to it being included in every list of bike-friendly cities. He was also a tireless promoter of the city.

Back when I was working in Minneapolis, one Monday morning a co-worker told the story of she and her fiancée had attended an outdoor winter event that weekend. A man had starting chatting with them and eventually introduced himself as the mayor of Minneapolis. He was just that outgoing.

Another time I was listening to the radio as I drove to work. I had gotten up on the wrong side of the bed that morning was very, very grumpy. R.T. happened to be on a morning drive-time show chatting with the host about music. The two of them were having so much fun that I realized, as I drove into the parking ramp, that they had completely turned around my horrible mood. He was just that enthusiastic and energetic.

Anyway, like I said, this book has a limited audience, but I really enjoyed it.

Next was Kitchens of the Great Midwest by J. Ryan Stradal, which happens to be another book set in my home region. If you enjoy wine and/or food, there is a lot here to please you, not to mention an interesting story.

There is not a lot happening on the knitting front; I am being very good about resting my thumbs. This was made somewhat easier by feeling like death warmed — and not like knitting — over for most of last week and weekend.

I did pick up a WIP Sunday night — a hat of Aran weight on US#8s that I started in the car on the way to one of the reunions. It was a fallback project if I got tired of Herbivore. 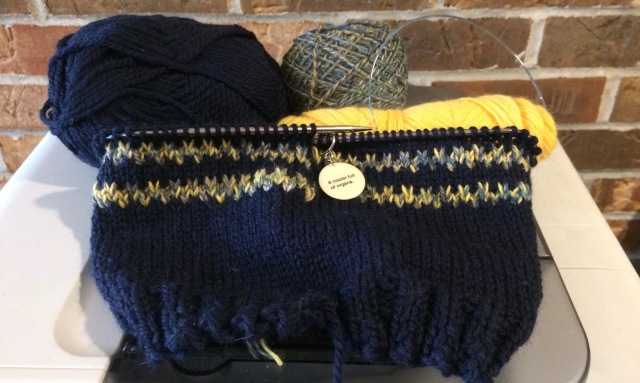 The stripes are three strands of sock yarn held together. They are a tiny bit thicker than than the navy Aran, but close enough not to be noticeable.

This  project is fairly easy on the thumbs because I don’t need to hold the needle tightly at all. But I try to limit my time on it to an hour at a time, at most. That seems to work; my trapeziometacarpal* joints continue to get better.

From Wikipedia: “The most important joint connecting the wrist to the metacarpus, osteoarthritis of the TMC is a severely disabling condition; up to twenty times more common among elderly women than in average.”

Oh crap. “…severely disabling” “…more common among elderly women…” Not sure which of those seems worse…