I finished listening to Exit West by Mohsin Hamid on the drive to Sioux Falls last week. What a good book it was. It took the story of two young people who chose to emigrate from a suspiciously Middle Eastern-flavored-but-unnamed country to an unknown place (twice!) and made it a universal story of refugees. I repeatedly marveled at the skill of the writer, both in plot and in language. Highly recommend.

In the analog world I find myself dragging. The Hanging

alternately grabs me and leaves me cold. Not sure if I will actually finish it. There is a mountain of books from the library next to my bed, but I find myself picking up my iPad at night instead of a book. My book group meets tonight and will talk about Medicine Walk by Richard Wagamese. Sadly, I have too busy shoveling out the Aegean stables that is my house to read the book.

In the library TBR pile:

How many of these will I actually read? Definitely not all of them — that would be an impossible task, particularly considering that there are  five more books waiting at the library for me to pick them up.

Things are progressing better in the knitting world. I made a fair bit of progress on Herbivore on the SF trip.

And the scrap afghan is nearly done. One more row after this one, I think. 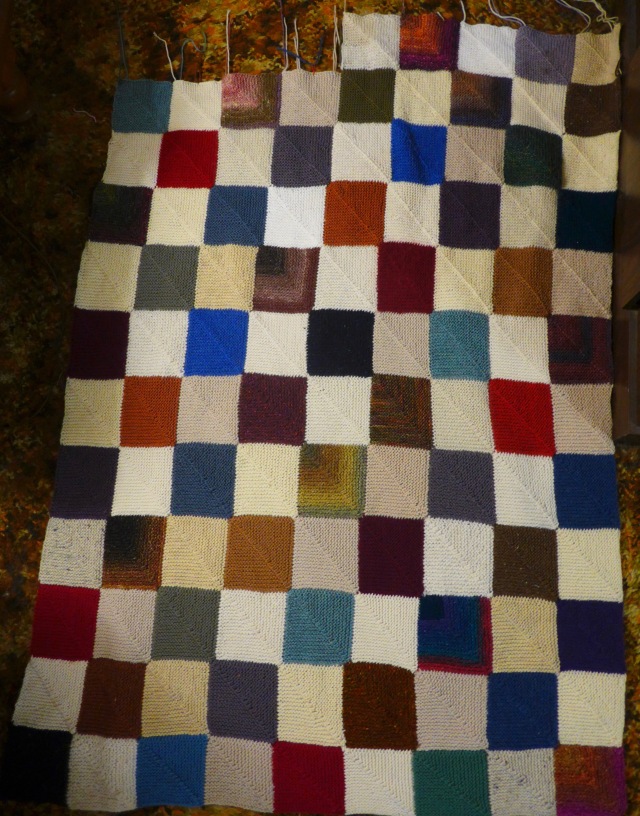 Which is good because I am nearly out of whitish yarn.