(Damn. This is the  third time I have had to write this post. WordPress keeps losing it even though I saved it multiple times! That used to happen all the time to people on TypePad, but this is the first time I have experienced it with WP. Damn.) 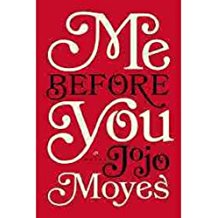 I recently finished this story of a young woman, desperate for employment, who takes a job to care for a paraplegic man. Of course, they end up falling in love, but even so, I (officially a senior citizen) found this story of a 20-something (trying to figure out her life) engaging. That plot typically leaves me cold.

As I was googling to find a photo of the cover I discovered that the book had been made into a mediocre movie last year and that there is a sequel book, After You. Given the mixed reviews I have found about my book, I am a bit hesitant to recommend it. But I liked it. So there is that.

Currently I am halfway though the first book of the Glasgow Trilogy, which (so far) is about a hit man setting up a kill. Intriguing; no judgement yet.

Remember those three projects I packed to take to the conference with me last weekend? The night before, I decided I should start one just to be sure it was properly mindless and therefore suitable for car and meeting knitting. The Talmadge Cloche turned out to be not that kind of project; I couldn’t even get the pinhole cast on going, although that was probably because I kept getting interrupted. Instead, I cast on the Madison scarf and immediately decided that was The One. The other two projects went back on the shelf for another time, and the scarf was OTN for the duration.

Also on the knitting front, I have been making what I, in my own perverse way, refer to as dead baby buntings, mainly because that reminds me of all those horrible and horrific (but funny) dead baby jokes we all told in middle school.

Backstory: the daughter of a good friend is a prenatal nurse in North Carolina, where she has

observed first-hand the appallingly high infant death rate. Daughter asked mom if she and her fellow knitters here would make these little buntings for the infants’ burials. As a project, the buntings are quick and easy. Easy because they are just garter stitch with a couple rows of K2tog YO (Full disclosure: I did a third repeat of the K2tog YO on the one in the photo by mistake) and quick because they are tiny. They are too small for any cat I have ever owned, let alone a normal-sized baby. So far I have made six, and I have a couple-few more planned. My friend will line them with flannel and thread ribbon ties through the YO holes, then send them on to her daughter.

If any of you have some acrylic in baby-suitable colors languishing in your stash, let me know and I will connect you the pattern and recipient.