The most amazing to [Smokey] is Jimmy Buffet. He did quite well with his one hit: “Wasted Away Again in Margaritaville.” He has built an empire of restaurants and other businesses.

Both sons were here with their dogs for several days. Percy, the pit bull, and Moose, the Rottweiler/retriever, are both neutered males. Moose, in particular, felt the need to demonstrate his dominance; however, the last time the two of them met it was Percy who came out on top — he grabbed Moose by the side of the neck and wouldn’t let go. We did not want a repeat performance that might well necessitate an emergency call to our vet.

Our dogs stayed out of the male dominance match. Misha stayed next to Smokey and Lucy was largely oblivious, although she was more nervous than her usual calm self.

The immediate solution was to pick up a couple of muzzles for the two testosterone-fueled dogs. They were hilarious as each attempted to get the muzzle off. Moose was pretty sure that he could still take Percy, muzzle or no muzzle; Percy was largely content to live and let live. I was not able to get photos of them in their snout adornments, sadly. Mostly we just kept the two apart in separate rooms. Elder Son and Moose left late yesterday afternoon, so now Percy rules.

We went to see the new Star Wars movie on Christmas Day, and I managed NOT to trip on my way into the theatre. This is not a spoiler: the stormtrooper whom Rey hypnotized to get him to let her go was Daniel Craig inside that white plastic suit. He was filming on the next set and wandered over to watch the Star Wars production; got a small, uncredited part (but it IS listed in IMDb).

We told the boys that we wanted nothing for Christmas, that we are trying to downsize and don’t need more stuff. They, of course, were creative in their definitions of “nothing.” ES gave Smokey this: 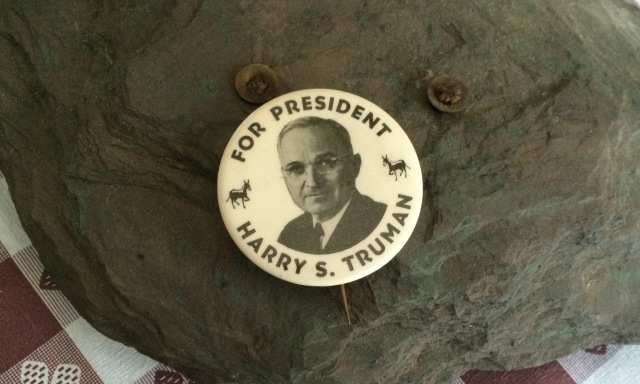 YS gave him the shower head from the Minneapolis house, which Smokey always liked because it did not have a flow restrictor.

YS got me a monitor that’s roughly the size of Connecticut off craigslist.com. Unbeknownst to me, he installed it on Christmas Eve, then called me into my office to see if I could find my present.

I finished the cowl last week. In fact, I finished weaving in the ends right before we went to the movies and I fell. It caught a lot of the gushing blood, but happily the bloodstains came out. Here it is, blocking on a popcorn can.

We had a (mostly) white Christmas.