So we went on a road trip. And all hell broke loose. Part 3, the end.

We arrived at the Cascade uneventfully on Monday evening (yay!). Cabin 11, the Honeymoon Cabin, was ours for four nights.

“Honeymoon Cabin” because it is set away from the rest, across a footbridge over the Cascade.

I had finished knitting a shawlette/scarf for myself on the drive and was hard at work on the second sock of a pair on Tuesday. I had every hope of finishing that pair and at least one more by the time we got home Friday night.

Disaster struck on Tuesday night, in the form of tainted guacamole on my Happy Hippy burger (burger with sauteed spinach, crumbled feta, and guac; why that qualifies as a happy hippy is a question for the the ages).

Vaguely nauseous by 8:30 pm, increasingly nauseous until copious vomiting at 3 am, then blessed relief. Except that the aftermath of that food poisoning laid me out for the next two days. On Wednesday I was so wiped out I could barely open my eyes or lift my head from the pillow. I slept all day.

Somewhat better on Thursday except that now I had a horrific headache. We figured out on Thursday evening that it was a migraine; tragically, I had no migraine meds with me, having not been so afflicted for a long time. But knowing what it was helped: I resorted to my pre-Imitrex remedy, a cold pack applied alternately to the sides of my head. Back in the day I kept a bag of frozen peas for this very purpose, but the icepack Smokey made served me well this time. After a few hours the migraine was 98% gone, and I could sleep that night.

The futon at rear left is where I spent the better part of two days. The finger over the lens is just added interest.

All this nonsense meant that I missed out on three (three!) days of dedicated knitting, not to mention reading, and I didn’t finish that aforementioned pair of socks until Sunday night. Nor did I finish the book I had started before we left (Stephen King, Finders Keepers; I am nothing if not a lover of great literature) until a couple of day after we got home. 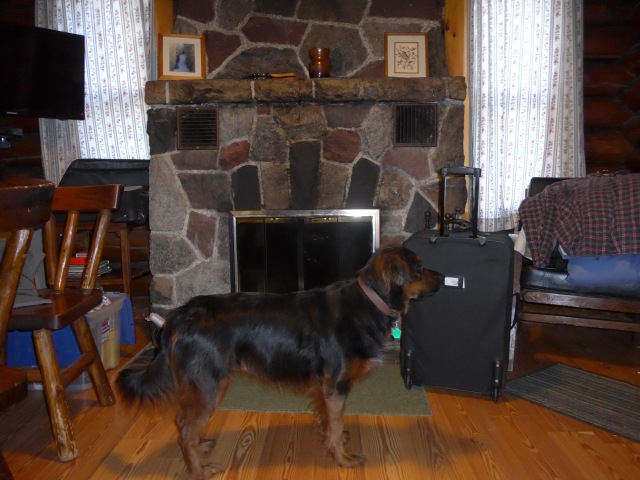 Misha poses in from of the fireplace as we packed up to leave. We did have fires in it, but my migraine-afflicted head could not appreciate them as much as it should have.

And that was the vacation from hell, may it never be topped, amen.

Like Loading...
This entry was posted in Food and Drink, Motorcars, North Shore, Travel, Vacation. Bookmark the permalink.

7 Responses to So we went on a road trip. And all hell broke loose. Part 3, the end.