Andrew! Matthew! Go away! This is one of those private posts! 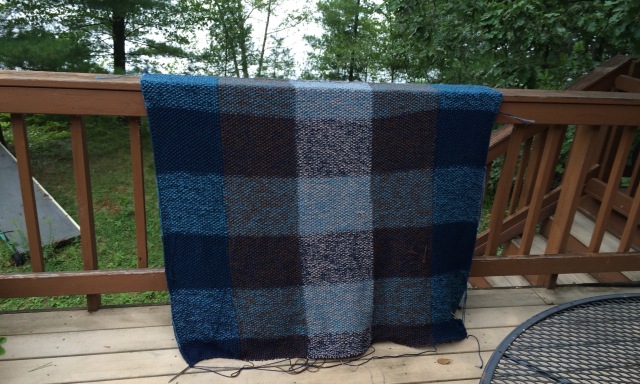 There is one dark blue stripe hiding over the railing.

Guess what? My gauge swatch lied! Not surprising, really, since I swatched with a different yarn* than that I used in the afghan. Let this be a lesson to you, children.

I wanted the afghan to be 45″ x 70″: five vertical stripes of 9″ width each, seven 10″ horizontal stripes.. According to my [lyin’, stinkin’, stupidly knit] gauge swatch, that required 30 st for each stripe. Fine, that is how I cast on.

Several weeks later it occurred to me to measure the actual stripes: 10″ wide. Huh.

Okay, so the afghan was going to be a little bit wider than I had planned. Fine.

The complication arouse when I remembered that when I ran out of the dark blue yarn in the first horizontal stripe, I had decided that the stripe was probably wide enough at 7½”, and by making each horizontal stripe use exactly one ball of yarn, it would make the whole process easier — no measuring each stripe to decide when to change colors, and fewer tails to weave in at the end. Fine.

But in my blissful and willful ignorance I neglected to think about how this would affect the number of horizontal stripes. The seven planned stripes would make the afghan roughly square, which I did not want. Younger Son had once remarked that his problem with most afghans was that they were too short; I meant to remedy that defect in these two afghans.

The amount of knitting is still roughly the same, but my mental calculations of how far I was in the process needed to be recalculated. Thus, I am not six-and-a-half ninths done (more than two-thirds!), I am six-and-a-half elevenths done (a little past half).

Clearly, I will not finish by Labor Day, but I had given up on that goal several weeks ago. Sometime in September I will be able to bind off and weave in the ends. On the plus side, I am truly enjoying the mindless nature of this knitting. I can watch TV with only the tiniest smidge of concentration. (Yes, I have had to drop back a stitch or three on occasion to fix the garter stitch, and there is that place where the line between two vertical stripes moves over a couple stitches, but hey! nothing’s perfect!)

* In my defense, I needed to knit the gauge swatch in order to know how much yarn to order. Ordering one skein of the real yarn, Berocco Vintage worsted, first  for the swatch would have added an additional several dollars of shipping. Ever the frugal Kat™ (not!) I chose to swatch with Cascade 220, which I remembered as also being a lightweight worsted. Not quite the same, though.