Younger Son's new phone, a Sony something, does tricks.
My phone did something similar, but for a much shorter time.

I don't think I ever showed you one of my adventures during the yarn-caking marathon. I had read on Ravelry that Zauberball was impossible to pull from the center without massive tangles, so I pulled from the outside.

It was not entirely successful, although by the third ball — I think this one was the second —
I had figured out how to minimize the tangles.

I took a class on brioche stitch from Mercedes Tarasovich-Clark at Yarnover this year. Of the 20 or so people in class, nearly everyone had attempted brioche before ::raises hand:: but were unable to master it from a book/handout/pattern. ::nods sheepishly::

The class was an excellent idea for all of us. We found that brioche stitch is easy and that the knitter develops a rhythm with it after a bit, just like ribbing. 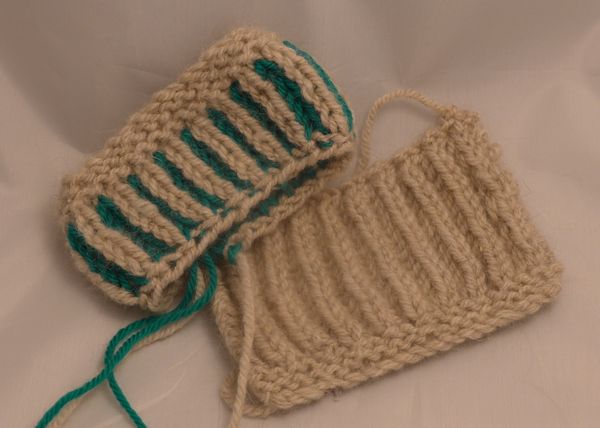 The two swatches I made during class.

On the way to Yarnover that morning, I suddenly remember that I had left the two balls of required worsted weight yarn on the seat of a different car. Oh well, I thought, I can probably mooch some yarn off someone else in the class. People always bring more yarn than they need.

When I walked into the Yarnover venue, which was filled with yarn vendors, I had a good chuckle at myself. Gee, do you suppose I can find some yarn here?

Actually, it was not as easy as I first thought. Most vendors bring lace- and fingering-weight yarn and/or fiber. I was more than halfway through the place before I found some worsted weight.

What you cannot see in the photos is the wonderfully woolly-but-soft-squishy texture of the yarn.
50% CVM/30% alpaca/20% angora, oh my!

I bought the one on the left first, but after the class I went back to buy the second, contrasting one. They are in the process of becoming a cowl that is a larger version of white and green swatch. The best way to cement a new stitch is to make something immediately to get the process into muscle memory.