Sundays are for posting.

I have become rather obsessed with mahjong on my computer and my iPad. 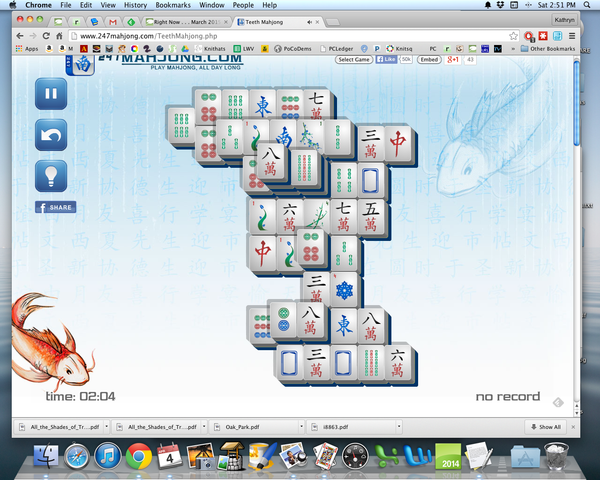 I used to have it on my Windows box back in the day, but that was a downloaded program; this is online. Who knows what nasty stuff might be infesting my hard drive…

As I played I found I had an emotional reaction to the different pieces, usually based on how easy or difficult it was to recognize and match them. To help myself I have made up names for many of the tiles. Across the top row we have Nine Stick, Flat Top, another Nine Stick, Legs, Nine Plate, and Tee. The bottom row is Box, Three-Stroke, Box, Nine Stick, and Little Man. Weird, but it helps this non-Chinese reader. Those are all pretty straightforward. Then there is Little Bad Guy, Grace, Pointy Top, Round Bottom, and Strikethrough. And Chairlift and Birdhouse.

Enough of that. I am amusing only myself.

Our taxes are in progress (hence the obsession with a computer game). I have a first draft of the federal return, still need to print it out and review it as though I were still at work. Then the WI and MN returns, yuk. For the past several years Smokey has had to be a MN resident (MN tax law) even though he lives in WI, and I am a WI resident. Even the fancy-schmancy professional grade tax software we had at work could not quite manage that situation, requiring me to override things in the return. Overriding was strongly discouraged because it usually meant an error.

Because I am retired now and my time is more leisurely, I was able to take a different approach on the return: one day I did the W-2s and 1099s. The next day I did the cap gains. The next couple days were spent on the rental property. Then I took a break for a few days. Back at it to do the contributions. Next day the rest of the itemized deductions. Although this approach meant I always had the return nagging at me, it was also low stress.

On Saturday Elder Son called to ask for help on his return. He and I had gone through his situation back in early February and I had counseled him on which forms he needed, but he didn't go ahead and do the return. He did, however, manage to forget everything I had told him. His return's only quirk was an tuition credit; at work the software took care of the mechanics of that, but he and I had to wade through the form line-by-line on the phone, each of us on the IRS website looking at forms and instructions. He kept saying, Jeez, they're telling you every step without ever telling you the goal of what you are doing. Yup, the IRS is not in the business of making this process easy or self-explanatory. He wanted to know how people who are not good at math do their returns. I explained about H&R Block.

Speaking of H&R, I am using their tax software package this year and am not happy with it. I originally purchased and downloaded TurboTax, but found that it wouldn't run on my 2008-vintage computer. (Refund for it takes weeks 😦 ) The Block software runs and was cheaper, but damn, there is a reason it cost so much less. I am not looking forward to reviewing the return; if what I saw going on on the screen comes through on the return, I am gonna be doing some overriding.

I was able to tweak the color of the socks to be accurate; the fingerless gloves are actually camel-colored. The good news is that my new camera seems to be able to focus on yarn and knitwear, something my previous camera had a lot of trouble with.

There are so many things in my Ravelry (and mental) queue that I am feeling like I will never accomplish them all. And I probably won't, especially if I keep adding things. But that's part of the fun of knitting, right? Seeing all the possibilities? That is probably a part of any creative endeavor, I guess. Choices.

0 Responses to Sundays are for posting.