Tis a sad day, but an inevitable one.

From what I can gather from talking to people barricaded off a block from Zuccotti and what I've read since getting home, hundreds and hundreds of cops came and massed around 1 a.m.  They moved into the park and physically cut it off from the outside world.  They arrested people and then made them stand and watch while they destroyed the encampment and threw all the tents into dumpsters.  They tear gassed the kitchen.  They trashed the library and threw five thousand books in the garbage.  They beat and arrested New York City Council member Ydanis Rodriguez.  They attacked peaceful demonstrators with a sound cannon.  The cops wore riot gear which would protect them from hypothetical assault, though the only violence and coercion in sight was their own.   Afterwards they sawed down trees and brought bulldozers into the park.  I've never seen so many cops.  I asked one if any crime had been committed and got no answer.  I told him that I'd seen no crime committed, that all I'd seen were Americans exercising their First Amendment rights, and he agreed and then kept following orders.  They were so confident of the rightness of their cause that they attacked in the dead of night and confined reporters to a press pen.

Yes, Zuccotti Park was messy. Democracy can be messy. 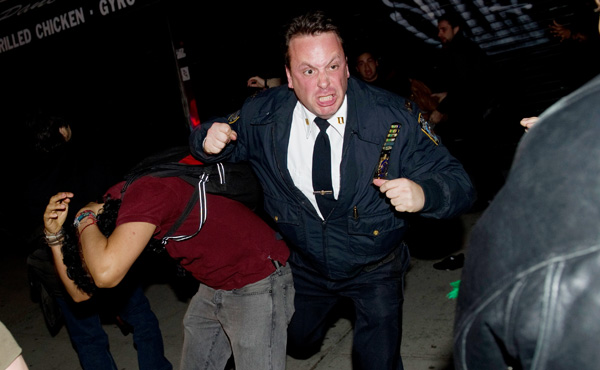 Gee, do you think there might be a groundswell here?

Of course the police moved in and cleared out the protesters in so many cities. Leaving them there was a constant reminder of the failure of Wall Street and Washington and the regulators who were supposed to protect us.

@unrealfred
I don't support #ows w/out reservations, but I strongly oppose media blackouts, ignoring the rule of law, and the threat of violence.

From CNN this morning:

New York (CNN) – A New York judge issued an order Tuesday morning allowing Occupy Wall Street protesters to return to Zuccotti Park, just hours after scores of police in riot gear ordered them out and tore down their tents…

City officials had intended to allow protests to resume at the park, but said they would not allow demonstrators to set up tents or camp. The park will remain closed until officials sort out the legal situation, Mayor Michael Bloomberg said…

The operation to clear the park began around 1 a.m., according to Bloomberg…

Police in riot gear then moved into the park, evicting hundreds of protesters…

Continuing concerns about public health and safety and the impact of the protests on nearby businesses, as well as the rights of others to use the park, prompted city officials to dismantle the camp…

The air was thick with smoke, which some protesters said was from tear gas that officers lobbed. thers said officers took thousands of books from the camp's makeshift library and tossed them in Dumpsters…

CNN could not confirm those accounts, as police kept journalists a block and a half away from the park during the raid. However, CNN was able to obtain footage of piles of clothing, tents and tarps made by police as they cleaned out the park.

"It was fairly clean," he said of the park. "No urine or fecal matter. There weren't things strewn about."

Many of the protestors reassembled at Foley Park near City Hall.

It is deja vu back to the 60s all over again. Did the protests of the 60s end the Vietnam war? Did they even cause it to end sooner than it might have? Who knows?

But did those protests change our country? Yes, indeed they did.

Will that happen again? Who knows?

I for one am looking forward to seeing what happens next…

(I am a little disjointed this morning — can you tell? Between worrying about #1 Son and attempting to write a speech for the county board meeting tonight, all while attending the annual 2-day tax conference, my brain is spread thin…)

0 Responses to Tis a sad day, but an inevitable one.