To me, vacations are a time to knit and read. How can I stand the excitement, you ask? Don’t try this at home, folks – I’m a professional.

Perdido Street Station by China Mieville
Feed by M.T. Andrewson
Zoo City by Lauren Beukes
A Dark Matter by Peter Straub
The Compassionate Carnivore by Catherine Friend
Vanished by Joseph Finder
The Big Short: Inside the Doomsday Machine by Michael Lewis
Hot, Flat, and Crowded: Why We Need a Green Revolution and How It Can Renew America by Thomas Friedman*
CO2 Rising: The World's Greatest Environmental Challenge by Tyler Volk
Night of the Grizzlies by Jack Olsen
Children of the Sun: A History of Humanity's Unappeasable Appetite for Energy by Alfred W. Crosby
Earth, The Sequel: The Race to Reinvent Energy and Stop Global Warming by Fred Krupp and Miriam Horn
Oil on the Brain: Adventures from the Pipeline to the Pump by Lisa Margonelli

Heh. Can you guess what I was obsessed with when I chose my vacation books?

So far I have read Vanished (suspense novel, supremely mediocre) and Night of the Grizzlies (nonfiction account of two 1967 fatal grizzly attacks in Glacier National Park; recommended by soxanne; glad I didn’t read it before we went to Glacier last year) (headline in Thursday's local paper: Man Killed in Grizzly Attack in Yellowstone National Park. Eeep.). The top three paperbacks are all sci-fi, the other is probably horror; all excellent, non-demanding amusement. I started The Compassionate Carnivore – by the same author as Hit by a Farm – before we left home. It is a nice blend of humor, introspection, and ethics; I might be able to handle it. The others, mostly nonfiction, may be too much for my vacationing brain.

On the audiobook front, so far I have listened to The Girl with the Dragon Tattoo, The Girl Who Played with Fire, and The Girl Who Kicked the Hornet’s Nest by Steig Larssen. I had read or listened to all of them before but wanted to do it again in one continuous string; #2 and #3 are really one story. Then I listened to A Study in Emerald read by the author, Neil Gaiman. That was a short one, less than one hour.

I just finished Grave Peril, #3 in the Harry Dresden series. I heartily recommend listening to the audios of this series. The read has the sexiest voice on the planet, plus he reads them as though he were telling the story over a beer the day after it happened. Much more enjoyable (again, imho) than reading them.

* Last night I couldn't fall asleep so I grabbed a book from my stash — in the dark — and a headlamp to read until I got sleepy. This was the one. Friedman is such a wretched writer and egoist that I made it to page 32, skimming large parts, before my eyelids drooped. Success!

I brought along enough knitting projects to sink a battleship.

The Lace Shawl of Doom  Delight for BGFE.

This is coming along swimmingly. I have finished the first chart and am ready to start on the border. That simple statement belies what lies ahead, though; the pattern warns that most of the knitting is in the border, plus chart 2 is altogether different and appears far more complicated than chart 1. Stay tuned.

This is currently about two-thirds done but was put on hold when I took up the Lace Shawl of Doom again. Nice pattern, nice yarn – I’m using Louet superwash merino worsted left over from my kimono sweater.

Palindrome, also for the RSP.

Notice how well-defined the cables are? Not. The yarn is Drops Alpaca Sport, luscious stuff but not at all suitable for good stitch definition. I have since frogged that effort and am instead doing a mistake rib pattern that works much better with the yarn. It is also nice mindless knitting 🙂

Actual color is somewhere between the two photos, orangey-red like the second but darker like the first.

This was to be my fall-back project, the one I would carry into restaurants, etc. Instead the mistake rib scarf has become the take-along. That’s okay; I’m not dying to have the socks done. Yarn is some OnLine Supersocke 100 Circle Color that was on sale at Webs last year.

These last two projects got packed to come along when I was apparently on drugs and in a fantasy daze, thinking how awful it would be if I ran out of knitting projects. The chances of either of them even getting cast on during this tripe is roughly… zero.

Yarn for a narrow Montego Bay scarf for me.

Yarn for Braided Glory for me. 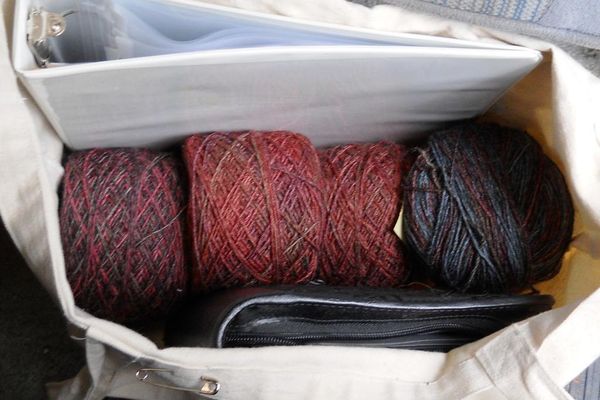 I was thrilled to match this yarn with a pattern. The yarn is 1600+ yards of Brooks Farm Acero, a sport/DK blend of superwash wool, viscose, and silk. It is not enough to make a sweater for me and has been yearning for a pattern for several years. I think it will be perfect for this shawl, although the pattern will use only about half of it. I am not wild about wearing shawls, but this one seems like it will stay in place without fussing.

As I typed that, the vision of a short- or three-quarter-length sleeved lace cardigan came into mind. Lace takes less yarn than stockinette, right? And I am now lace-qualified, right? I may need to investigate that. I have some other, not-enough-for-a-sweater yarn in my stash that would work for the Braided Glory, actually better than the Acero. Stay tuned.