The lace shawl continues s-l-o-w-l-y. Back around row 45 I figured out how to read my knitting and felt very proud. I continued with great confidence – and care – but around row 55 or 60 I found that I had screwed up something royally. Perhaps I could have fixed it, perhaps not. I did not even try, just threw up my hands and frogged back to the lifeline.

Imagine my horror a few rows later when I discovered that my mistakes had begun BEFORE the lifeline. That column of stitches that is the stem of the openwork leaf? It should continue and become the stem in the next leaf above it. That was not happening in part of the shawl.

I put down the knitting and walked away. Over the next few weeks I would pick it up, look at it, try to figure it out, and put it down again.

Eventually I put in about a gazillion markers, counted the stitches, put in some more markers, figured out where the yarnovers and k2tog/ssks should be, recounted the stitches, wrapped waste yarn around certain stitches, and after much concentration located the errors in the row on the needle. The pattern is such that each half of the shawl is exactly like the other; I have made almost no mistakes in the right-hand half and multiple mistakes in the left-hand half. The mistakes were not apparent when looking at the lace unless the viewer knew exactly how the motifs were supposed to line up above each other; then one could see that I was one column of stitches off in a couple places on the left side.

With great care I knit the next row, making whatever adjustments were necessary to get the knitting right again. A few rows later I caught a new error and adjusted for it. One too many stitches between the markers? Do an extra K2tog. Forgot a yarnover in the previous row? Pick up the strand between the stitches and create the yarnover while purling back. None of these are news to anyone who has ever knit lace, but I was pleased to have come far enough that I could *fix* my errors.

I am nearly back up to row 60 and feeling a tiny bit cocky. That is a sure sign that I should be extra careful.

Here are the things that have helped immensely in this lace saga.

Stitch markers. A commenter recommended putting markers between the repeats. Hallelujah! What a great idea! I had not actually realized before that this was a 10-stitch repeat (duh). Now I would know immediately whether I had the correct number of stitches.*

Lifeline. No explanation needed. (Color is way off in this photo. Auto-correct scores again… not.) 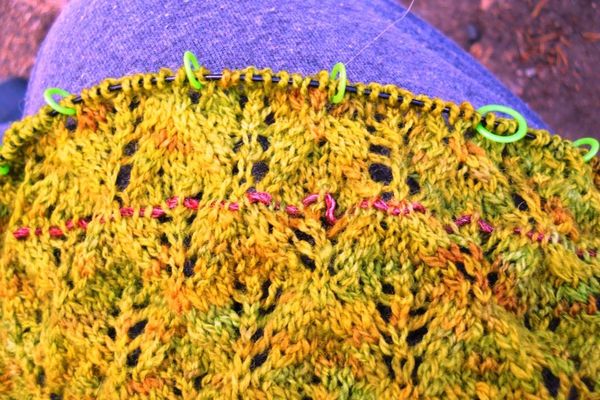 Row counter. I have no explanation as to why it took me so friggin’ long to begin using a row counter. 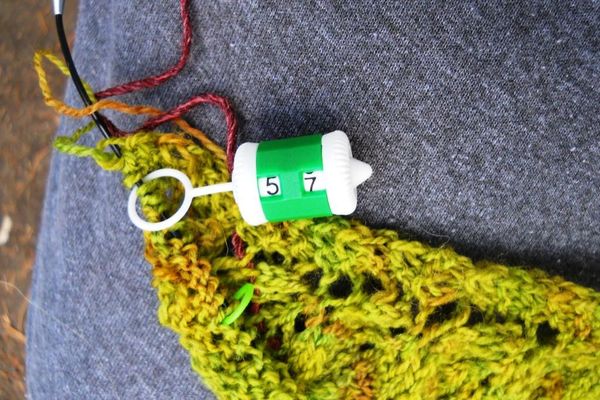 Before I started using the row counter, every time I picked up the knitting it took me many anxious minutes to determine which row I was on. During the long pauses in the shawl knitting I started a couple scarves for the Red Scarf Project: Fast Forward and a modified version of Palindrome. Fast Forward has a 68-row chart for the pattern at each end, and I threw a row counter onto my needle as soon as I got to the chart. I knew from knitting Palindrome several years ago that I needed a row counter to cable at the right row. When I finally went back to the lace shawl I immediately awoke to the need for a row counter. Lesson learned.

I started out using 3×5 Post-Its but they lost their stickiness pretty quickly, plus I had to use at least 3 to mark the entire chart row. The highlighter tape works soooo much better, plus it allows me to see the row below.

The areas highlighted in pink and yellow were that way on the original pattern;
I printed this on a b&w printer so had to improvise.

There are a few bummers, however.

This pattern is long. Here is where I am. 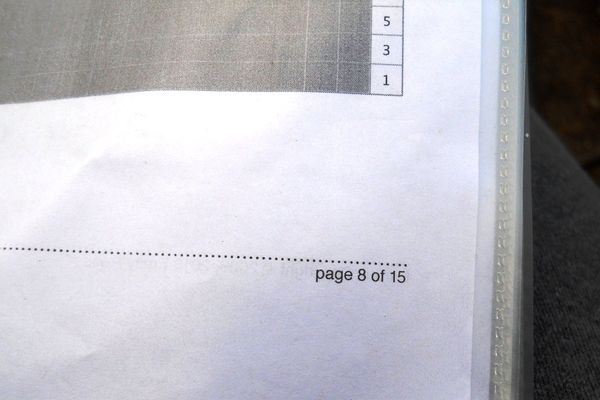 …and here is how much yarn I have used. See the big hole in the center where I have been pulling out the yarn? 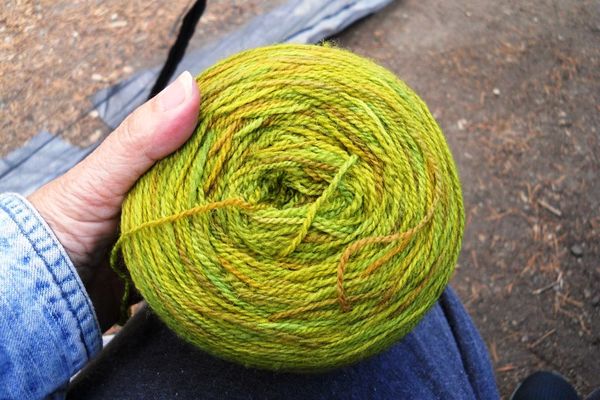 I may need to rethink my goal of finishing this while on vacation. We have 11 10 days left.

* Using stitch markers also created a lot of angst… until I realized that the 10-stitch repeat moves one stitch to the right every right-side row, which necessitates moving each stitch marker one stitch to the right as well. Is this characteristic common to triangular shawls that increase 1 stitch at each edge? I sure wish the pattern writer had mentioned it. Would have spared me any number of gray hairs.

0 Responses to The lace saga continues.