I thought I would share with you what I went through to get this photo:

I used my eBay light box because I wanted to get a good shot of it. As you all know, natural light is tough to come by in the winter, especially if you are like me and don't really get started on the day until about 4 pm when the light is already fading.

Notice how I forgot to use the background swoop inside the lightbox? But later, much later, I fixed that with the retouch tool in iPhoto.

#2 Son rags on me because, even if I remember to use the swoop, it is always creased and wrinkled. This time, though, my iron and ironing board were already out and mere inches away, so I decided to fix that.

However, the swoops are nylon and the nylon setting on my iron is too cool for steam. And I needed really steam to get these wrinkles out.

The iron is set on 2, even though the nylon setting is 1. From experience I have found that the labeling on the iron is conservative, and that I can iron things with it one setting hotter than the labeling would have me believe. With steam coming out of the soulplate holes I held the iron 1/4-inch above the fabric for a few seconds, then ironed it really fast. No problems.

Your results may vary.

Next, I thought that the yarn would show up best if I used the black swoop. After all, I had held it against every color under the sun to decide what yarn to contrast with it in the scarf I had originally planned, and charcoal was the best choice. So black should really make it pop, right?

This is just a sampling of the shots I took. In retrospect, I see that the contrast between the black background and the subtleties of color in the yarn made it hard for the camera to capture the latter. If you click on any of those you will see how washed out the yarn looks compared to the first photo. Perhaps I could have corrected it in iPhoto, but I didn't even try. While shooting I kept backing the halogen work light (the white triangle at the upper edge of the establishing photo of the light box) farther and farther away from the box, putting another layer of white fabric over the top of the box to filter the light, aiming the light at the ceiling, trying both the regular and the macro setting on the camera — everything I could think of.

Eventually I decided to use one of the original shots and to blur the background. At least my swoops got ironed. And stored in such a way to keep them that way. 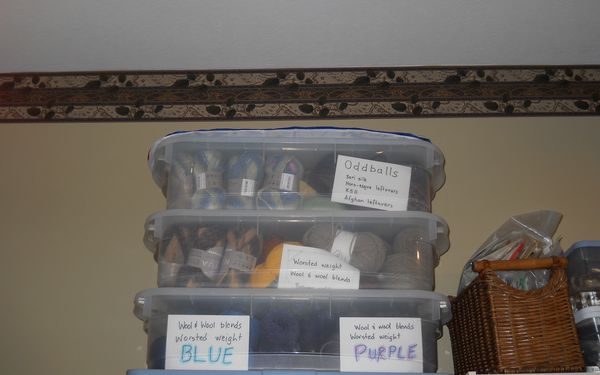