"jeeze louise, I hope you're feeling better! Bobby had an episode similar, ended up in ER with a kinked intestine, one of the interns dubbed him Tasmanian Devil (he sounded just like him, the cartoon character) he spent a couple of nights in hospital getting morphine shots to relax and unkink (which it did), he wasn't complaining :^)"

Do you read The Bloggess? Cuz today's post is frickin' hilarious. And the comments on pretty much every one of her posts are as funny as the post itself. My favorite comment on the linked post:

Hey, ya wanna see some knitting? Cuz I got some. I finally finished these socks while we were on last week's mini-vac.

Oh, you want to see the ENTIRE pair of socks? Well, all righty, then.

Yarn: Berrocco Vintage (50% acrylic/40% merino/10% nylon worsted weight) in 5182 Black Currant (red), 5187 Dungaree (faded denim blue)(no longer available at Webs), 5177 Douglas Fir (green), and 5192 Chana Dal (gold). I bought one skein of each from Webs plus one of 5185 Tide Pool (bright teal) with the idea to make several pairs of multi-colored socks until I used up the yarn. I was also curious about how an acrylic blend would wear and feel in socks. The first pair I made from this yarn demonstrated that it is not warm as the equivalent weight of wool (Duh) nor does it breathe quite as well (Duhx2), but it is still acceptable (Whew.).
Needles: US#2 from the toe to the ankle, then increasing one needle size every inch or so until I was using US#4.
Pattern: Wendy's Generic Toe-Up sock. I love this pattern.

Yes, there were a LOT of ends to weave in. Wanna see a few? 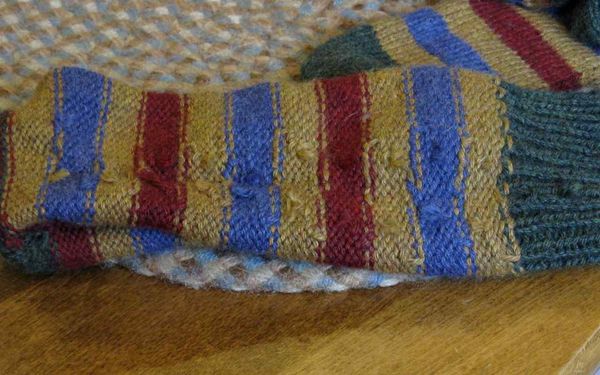 No, it was not the excessive number of ends that kept these OTN for six months. I ran out of the red and waited to order another skein until the next time I placed an order with Webs. But, silly me, I didn't double-check the color name and number and ordered Black Cherry instead of Black Currant. Black Cherry turned out to be a perfectly nice color and one that I will use eventually, but it was much darker than Black Currant and would not work in the socks. So I had to wait until the next Webs order.

This pair of socks, just like the first pair, were inspired by Kristin Nicholas's socks in Kristin Knits. I am enchanted by her colorful-ness. Such fun. I am also enchanted by the notion that knitting can be about playfulness and not just tastefulness and usefulness.