Yeah, you have already seen that one, but it is too good not to use again. That is suburban Buffalo, WY in the
far background. This one was grazing in the Big Horn
mountains a couple miles above our campground. They are hilarious when
they run — their legs turn into springs and they bounce, stiff-legged,
over the ground.

Oops. That one was in the Many
Glacier
lodge. 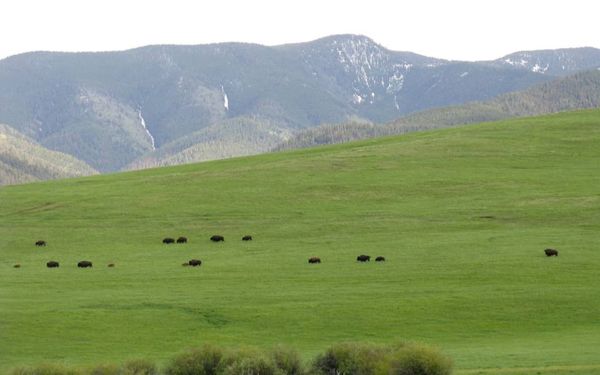 He was headed toward us. He — or his identical twin brother — was shortly thereafter was observed approaching the little road we were on. After we reached the end of the road a few minutes later, turned around, and were driving back, we looked for him again. This time, he was so close we could have reached out of the car and touched him.

We kept driving and I didn't even get a photo. He was so close we didn't want to alarm him — he could have done major damage to us if he so chose.

Here is where we saw the buffalo: 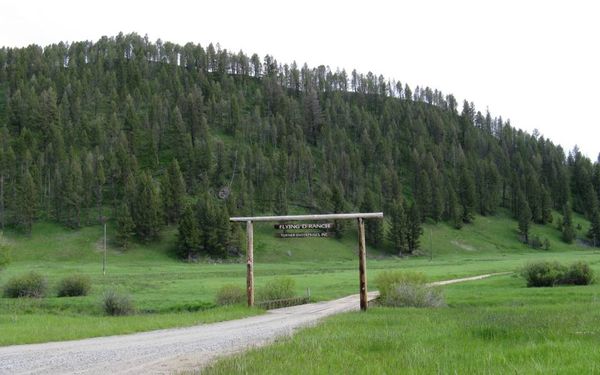 The buffalo are on Ted Turner's gazillion-acre ranch. We were spending the day with my cousin and wife, who retired near Bozeman, MT. Their property abuts the ranch.

But we were not trespassing; we were on the public road that leads to a public campground. Because the latter is on the ranch, Ted has to let the public use the road.

Ted Turner anecdote related to us by my cousin: TT has a lovely house on the ranch but was unhappy with the view; he couldn't see the mountains well enough. So he had the top of a low ridge removed. All better now. Four or five of these were grazing on
the lawn at Many Glacier lodge. Anybody want to educate me as to what they were? Prairie
dogs*? Whistler swans? Elk? We saw more unidentified animals outside Many Glacier lodge. 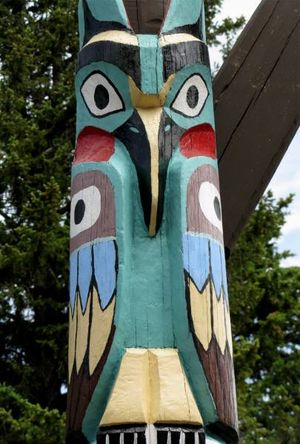 Well, upon closer inspection we can probably agree the lower part of the left one is a bear and the right one is a raptor. But in person I was too blown away by the visual even to attempt identification.

* None of the prairie dogs in Wikipedia have stripes on their tails like these.